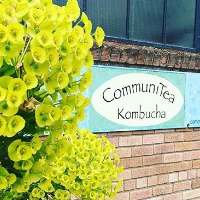 An Evening with CommuniTea

CommuniTea is a neighbor to our Seattle store, located at 21st and Union next to Central Cinema. CommuniTea has been around since 2008 and in the neighborhood since 2016. They make traditional kombucha brewed from organic and biodynamic tea grown on two sustainable estates in India and Nepal. Because they use traditional methods, CommuniTea kombucha has no added flavors and contains a small amount of alcohol (from 1 to 3%).

CommuniTea founder Christopher Joyner wants his product to be healthful both for those who drink it and for the natural world. He uses green tea because it is a rich source of antioxidants and polyphenols and allows him to keep residual sugar low. He tries to build in eco-friendly practice through the process of creating his kombucha, from getting his tea from organic farms to putting their fermentation room on the second floor so he can use gravity instead of electricity to power their bottling. In addition, CommuniTea is only sold in returnable glass bottles and Joyner reports an astounding 90% return rate by his waste-conscious customers!

Open to members only. Make sure to RSVP early as these "Evenings with..." events tend to fill up!

An RSVP is required for this Event. CLICK HERE to RSVP now.