Patronage dividends allow us to strengthen our co-op so we can continue to serve our community now and in the future. Every year that the Co-op is profitable, our board will have the option of allocating dividends to owners with some being retained as needed and some being distributed as deemed prudent.

Note: The 2016 Central Co-op merger and shift to worker/consumer ownership won't affect 2015 dividends. Any dividends distributed in 2016 for 2015 patronage will go to consumer-owners of Central Co-op who shopped at the Seattle store in 2015. Beginning in 2016, patronage at both locations will count towards dividends, and any dividends allocated will be split between workers and owners.

At this year’s Annual Owner Meeting, we shared the difficult news that we suffered operating losses related to the build-up and then sudden closure of our 6th Ave store in 2016. This had the overall effect of eating up the profits from the Seattle store and then some. As a result, there is no surplus and therefore there will be no patronage allocation for 2016. This is a temporary set-back for our Co-op brought about by specific, extraordinary and unforeseen circumstances. In general, our Co-op is performing well and is poised for future growth.

What is a Patronage Dividend?
When Co-ops have a surplus (a.k.a. profit) left over at the end of the fiscal year, the Board may vote to declare a share of the surplus to the Owners as distributable surplus. The surplus is allocated in direct proportion to a co-op Owner’s purchases in that fiscal year and that allocation is called a “Patronage Dividend.”

Why does the Co-op retain a percentage of the Patronage Dividend?
The portion of allocated patronage that is retained is used by the Co-op to operate, to grow, and to achieve our Ends.

How are my purchases recorded?
In order to record your purchase, the cashier asks for your Owner number before each transaction. All merchandise rung through under your number is recorded by our system.

Do I recieve a dividend for my patronage of Tacoma Food Co-op?
Because this year's Patronage Dividends are based on 2015 sales at Central Co-op, only those who were owners of Central Co-op in 2015 (and shopped at the Seattle store) pre-merger recieve a 2015 dividend.

Co-ops are a different kind of business. Unlike shareholder corporations, co-ops are owned by community stakeholders and run democratically for their benefit. (This means you!) Generally, in a traditional corporation, a few investors will put in most of the money, get most of the benefits, and determine the direction in which the business will go. In a co-op, many people put in small amounts of money to sustain a business in which their votes will be equal, decisions are made together, and economic gains are shared in proportion to a person’s use of that business. In March, the Board of Trustees decided that it will return profits back to its owners through patronage dividends, because it represents a great way to balance two priorities: the need to provide benefits that make ownership in Central Co-op unique and rewarding, and to ensure that the Co-op is financially successful for the long term.

As owners of other consumer co-ops with patronage dividend programs such as REI will know, patronage dividends are returned in proportion to how much money a person spends at a co-op. If a co-op has made a 5 percent profit, up to 5 percent of that person’s purchases may be refunded back to them. In years that the co-op does well, the owners can share its success by getting a larger dividend. If the co-op has a leaner year due to increased competition or has a need for reinvestment, it can choose to save more internally and distribute less.

Sustainable for Building a Long-Term Business

All businesses require financing to operate, whether it is to purchase new equipment, remodel a store, or open new stores to serve more people. A corporate entity can raise money by selling shares to anyone who is willing to put up money and can more easily obtain a traditional bank loan. A co-op depends on its many owners to invest small amounts of money by joining and agreeing to reinvest their profits. This is both a blessing and a challenge. It is a blessing insofar as it ensures that the co-op is controlled by its owners and that its owners are a part of the community it serves. On the other hand, it makes raising capital more difficult.

Patronage dividends go hand in hand with the concept called retained earnings under the IRS tax code. When a co-op retains its owners’ earnings for reinvestment in its operations or to grow its operations, those earnings are considered non-taxable. This mitigates some of the challenges co-ops face in raising capital by allowing co-ops to keep more of their earnings for this purpose. More money stays in the co-op and in the community. It is a win-win proposition. 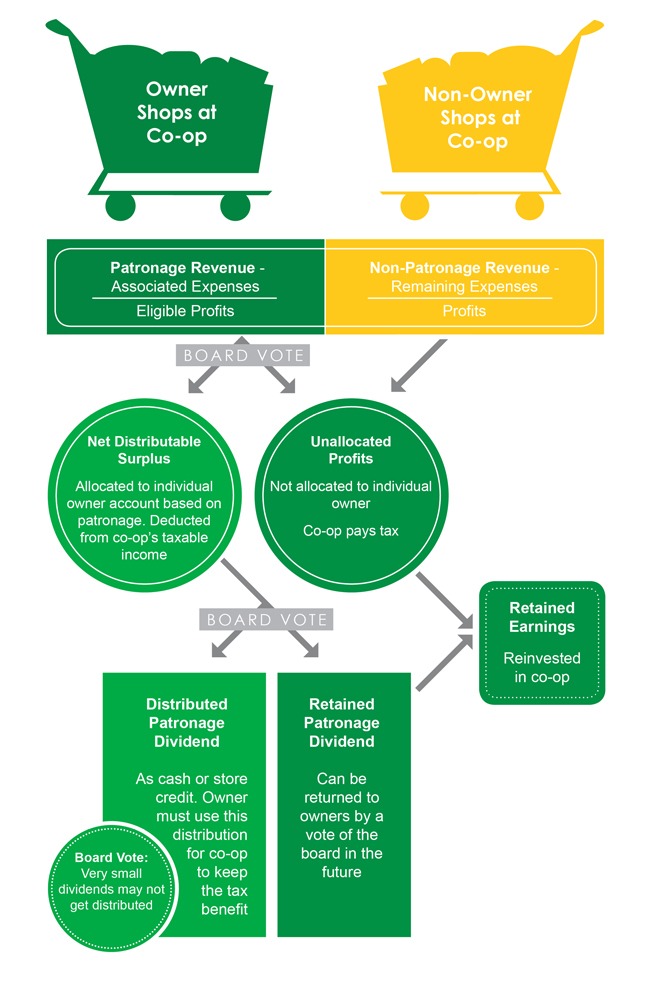 Owner: an individual who has embraced the 7 Cooperative Principles, paid an equity stake, and shopped at the Co-op within the last year. Legally a “member” in our Articles of Incorporation and Bylaws.

Patronage: an owner’s use of the Co-op.

Profit: the earnings we have after subtracting expenses from revenues. It is referred to as “Net Income” in the financial statements.

Eligible profits: the amount of profit that is the result of owner patronage. This is the maximum amount of income that we can deduct from our taxes by allocating it to owners. Also known as “patronage profit.”

Unallocated profits: all other profits not attributed to owner activity. For example, shopping by non-owners, or income earned from real-estate or marketing transactions.

Net distributable surplus: Eligible profits allocated by the Board for patronage dividends. If the Board chose to offset prior year losses, this amount would be less than eligible profits.

Patronage dividend: the amount of net distributable surplus attributed to a single owner for a specific fiscal year.

Retained earnings: the total historical accumulation of non-patronage profits (or losses) and retained patronage dividends. Prior to this year, all profits were categorized as nonpatronage.

Revolvement: the process of holding retained patronage dividends to build up a pool over time and then periodically distributing the oldest retained dividends to the owners whose patronage generated them, so the pool begins to “revolve” rather than simply grow.