In honor of Black History Month, we're celebrating the lives and work of noted African-American members of the cooperative movement. The African-American community has always practiced cooperation and solidarity to collectively survive and thrive in an environment constructed to keep them divided and excluded. Below are just a few of the famous and lesser-known promoters of cooperation as a tool for justice and prosperity: 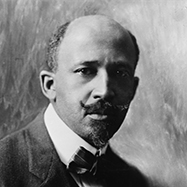 Sociologist, historian and civil rights activist W.E.B. Du Bois was a co-founder of the NAACP and one of most important thinkers of his time. He also viewed cooperative economics as a promising solution to racial economic inequality and a road to collective prosperity for African-Americans.

Du Bois came to this conclusion due the examples of African-American cooperation throughout history, which he examined in his 1898 book Some Efforts of American Negroes for their Own Social Betterment and in his comprehensive study Economic Cooperation among Negro Americans in 1907.

In 1918 DuBois founded the Negro Cooperative Guild to provide cooperative economics education and inspire Black leaders to start consumer cooperatives in their communities. One of the cooperatives inspired by the Guild was Citizens’ Co-operative Stores in Memphis, TN. Originally organized to operate co-op meat markets, the co-op turned out to be so popular that they sold double of the amount of shares they originally offered. By 1919, the Co-op was operating five stores serving 75,000 people. 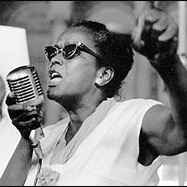 Ella Baker is the most well-known unknown leader of the Civil Rights movement. Recognized as the backbone of the Civil Rights movement, she was often behind the scenes, having played critical roles in the growth and development of each of the major civil rights organizations (NAACP, SCLC, and SNCC). Less known is that Ella Baker was a staunch advocate for building a cooperative economy and promoted cooperative development in New York City and throughout the country. She served as national director of the Young Negroes Cooperative League in the early 1930s, a federation of local groups founded by black journalist and anarchist George Schuyler, that sponsored the growth and development of local consumer cooperatives and buying clubs in major cities throughout the country. And in her own New York City, she served as board member and publicity director for the Harlem’s Own Cooperative, a consumer cooperative specializing in milk and a few other groceries.

She saw cooperatives as a training ground where people get to experience democracy and grow into their own power. She was an early embracer of participatory democracy, and an advocate for decentralized organizations, having leadership come from those most affected by the issues at hand. Through the Student Nonviolent Coordinating Committee, her ideas of group-centered leadership and radical social change influenced the entire student movement of the 1960’s, Students for a Democratic Society, and other radical and progressive groups during the 60’s and 70’s.

By Omar Freilla, founder and Coordinator of Green Worker Cooperatives, an incubator of worker-owned businesses in the South Bronx. 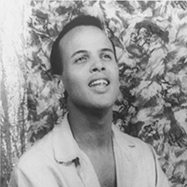 Well-known as a musician, actor and activist, Harry Belafonte is less well known for his long-time support of cooperatives as a tool for African-American empowerment.

Belafonte’s involvement in cooperatives began in 1958, when he was unable to find an apartment to rent in midtown Manhattan, despite the fact that he was one of the most popular musicians in America. When an apartment that he and his wife liked became “suddenly unavailable” when the owners saw that the Belafontes were an interracial couple, Harry sent his White publicist to secure the lease. When the Belafontes moved in, the building manager tried to force them to leave. Instead, Belafonte and some partners purchased the building and turned it into an integrated housing co-op.

The co-op was Belafonte’s home for almost fifty years and hosted many civil rights leaders, celebrities and public figures there. Martin Luther King, Jr. would stay with the Belafontes when in New York, and he wrote his first anti-Vietnam War speech there before delivering it at Riverside Church in 1967.

Belafonte became dedicated to African-American cooperatives throughout his life, becoming a fervent supporter of the Federation of Southern Cooperatives and its programs to help keep Black farmers on their land. Former Federation head Ralph Paige said, “Belafonte has often funded and participated in Federation events that were gatherings of all races to look for ways to work together in the rural South. Belafonte has stuck with the Federation through thick and thin.” 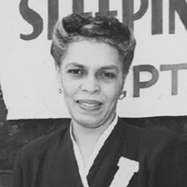 Halena Wilson was an influential leader in cooperative education, a mobilizer of women-led co-ops and an important link between the cooperative and union movements. As president of both the International Ladies’ Auxiliary of the Brotherhood of Sleeping Car Porters (BSCP) and the Chicago branch of the Auxiliary from 1930-53, she was instrumental in organizing the Brotherhood Consumer Cooperative in Chicago and was the only Black woman elected to serve on the national Consumer Cooperative Council.

The BSCP was one of the most important African-American unions of its day and many of its local and national leaders were also leaders in the Civil Rights movement, such as its founder, A. Philip Randolph, who organized the March on Washington in 1963. The Ladies’ Auxiliary, made up of the wives of union members, became deeply interested in co-ops as a tool for economic justice. Working with Randolph, Wilson spearheaded the creation of co-op study groups in Auxiliary chapters around the country, leading to the creation of consumer co-ops, credit unions and buying clubs in many cities.

In her hometown of Chicago, Wilson led Auxiliary members in creating buying clubs, culminating in the opening of the Brotherhood Consumer Cooperative in 1943. The Co-op helped union families better afford groceries, and auxiliary members governed and often worked in the store itself. In 1952, Wilson also helped create the Cooperative Union Eye Care Center, of which the Chicago chapter of the Auxiliary was a charter member. 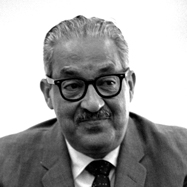 Legal legend Thurgood Marshall, the first African-American Supreme Court justice, first came into the public eye as the founder and head of the NAACP Legal Defense and Education Fund. For the Fund he argued many civil rights cases before the Supreme Court, most famously Brown vs. Board of Education of Topeka, which established that racially segregated public education was unconstitutional.

Marshall also did work on behalf of cooperatives. The cooperative model became an important method to secure places to live and farm in an era of intense legal and informal segregation. Housing co-ops organized by integrated groups of veterans after World War II led the fight to end the Federal Housing Agency’s restriction on lending to co-ops that allowed African-Americans to be members. Marshall personally intervened with President Truman to end the federal restriction on lending to integrated cooperatives.

Marshall was also one of several major Civil Rights leaders to live in housing co-ops in order to work around the racist practices that severely limited their ability to find integrated housing. “March on Washington” organizers A. Philip Randolph and Bayard Rustin, for instance, lived at Penn South, a union sponsored housing co-op in New York City. In his early years with the NAACP Legal Defense, Marshall and his wife even supplemented their income by doing home deliveries for their local consumer cooperative! 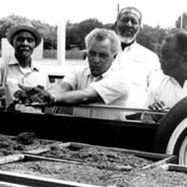 Facing an environment where white-run businesses sometimes refused to sell them basic farm supplies and white-run banks would not offer them equal credit, African-American farmers in the South formed marketing cooperatives and credit unions to give themselves more power in the marketplace. In 1967, 22 co-ops in nine Southern states came together to form the Federation of Southern Cooperatives. The Federation advocates for Black farmers and rural communities in the South by developing cooperatives and organizing and advocating for policy change. Currently it has over 70 active member co-ops in ten southern states.

The land owned by African-American farmers has dwindled from 8 million acres in 1960 to 2.3 million acres today, and the Federation has been dedicated to saving and enhancing the land of African-American family farmers, which is why it merged with the Emergency Land Fund in 1985 and became the Federation of Southern Cooperative/Land Assistance Fund.

The Federation took part in the historic case of Pigford v. Glickman, in which Black farmers sued the US Department of Agriculture for decades of systematic discrimination in their programs. In 1999, the USDA settled, in the largest civil rights settlement of all time, benefitting 13,300 farmers, but leaving out 70,000 affected farmers. That gap was closed with the “Pigford II” provision of the 2008 Farm Bill, which appropriated an additional $1.2 billion.