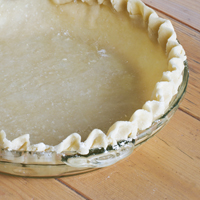 Now that the Co-op carries lard, we just have to share a recipe for one of the most classic lard recipes: Pie crust! Lard crusts are the flakiest around, with a milder flavor than butter-made crusts. For a flaky, more flavorful crust, replace half the lard with butter; and for a vegan crust, swap out the lard for your choice of vegan butter or shortening.

This crust works beautifully for sweet and savory pies--something to keep in mind when you need to get resourcful about how to use up your leftovers.

If you are working ahead of time, the crust will keep in the fridge for up to 5 days.

This pie crust recipe comes to us from the kitchen of Toni Ritche. And yep, she's the mama of our 16th & Madison Deli Manager, Angela Ritchie.

Embrace Spring produce and return of Washington asparagus with this quick and easy recipe!